At the end of April I was in Birmingham for the Cycle City Expo conference. As part of one of the optional site visits and workshops on the first day I snapped the following G4S van to be blocking a cycle track on National Cycle Route 5 at a set of traffic lights on the return journey. 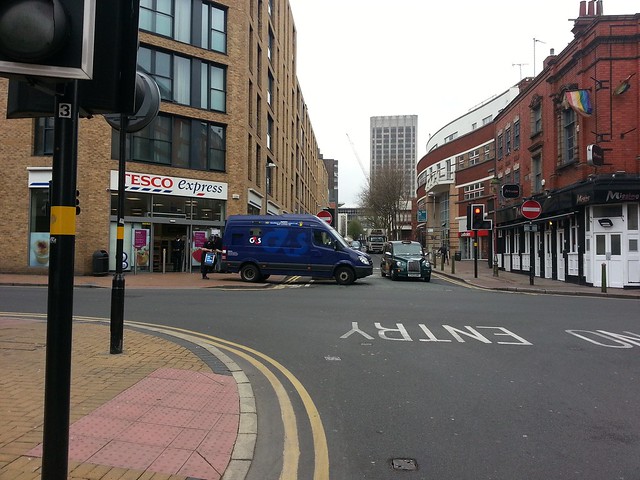 This was quite apt for the discussion about issues on the route.

I decided to quickly take the photo and to then send it to G4S to see what they would say. Seeing that their website had a section on social responsibility made me more interested in seeing what their response would be.

A day or so later I had short email to say that it had been forwarded to the branch manager. Then within a hour I had a call from the branch manager to confirm that it was definitely their van in the picture, and wanted to verify the date and time that the photo was taken so that they could find the particular crew involved. I also let them print the photo so that they could put it up in the depot as an example of how not to stop in front of a store.

About a week later I got the following great response from the branch manager explaining the situation:

I have identified the crew of the vehicle and have interviewed the driver.

We have agreed the position of the vehicle is unacceptable and we both offer our apologies.

I’ve also spoken to other crews who service this particular customer as to where we should and should not park.

Whilst everyone here agrees this is a very poor place to leave a vehicle the reason for the driver parking in such a poor position was the drivers attempt at reducing his and the publics risk of an attack.

G4S Birmingham unfortunately has quite a high attack rate. Last year it was approximately one attack per week and at peak times up to three attacks per week. As well as our crews being injured in the past there have been bystanders injured also and one incident where a member of public was killed.

Crews have to decide on a site by site basis where the best and safest position to park the vehicle is and in this particular case we got it very wrong.

The driver had forgotten the risks and danger he was causing to traffic and he will be more considerate in the future.

Thank you for bringing this to our attention as it helps us all at G4S improve and maintain standards of driving and parking.

Also thank you for permission to use the photo for training purposes it will be on our notice board with an explanation of it.

If you have any further questions please reply or feel free to call either number below and I’ll be pleased to answer them.

So it’s an extremely difficult balance to strike between parking in safe location and also parking in a location that minimises the risk of the crew dealing with the delivery or collection. With a decrease in parking and loading space, with the space in cities often being either pedestrianised or being reallocated for cycling does make it harder for these risky deliveries. It shows how hard it is create streets that cater for everyone.