Unfortunately I can’t say that I’ve managed to get distracted by something and end up cycling into the river. Sorry to disappoint.

On Sunday afternoon, I went for a cycle ride with my girlfriend, Andrea out along the River Gipping following the river as closely as possible. We got some of the way out, then as river heads out of Ipswich past the sea defences the path narrows and is no longer suitable for cycling on so we found a nice spot in the bushes and locked the bikes to the bushes and continued on foot.

A couple of hours later we got back from the walk [map]. I noticed a helmet in the water, looked at the other side of the path and realised that it was the point that we had left our bikes, at which point my girlfriend pointed out that it was her own helmet that was in the water. On closer inspection I noticed that there were two wheels beside the helmet and that it was our bikes that had been thrown in. 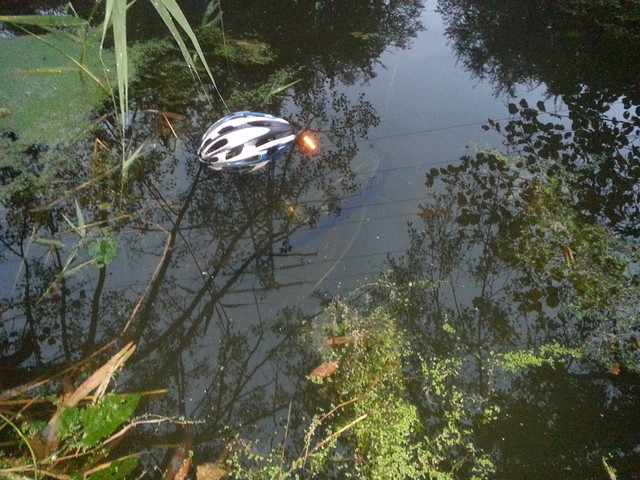 I took off my shoes, socks, trousers and jacket and slipped carefully into the river. It was slightly scary as I didn’t know how deep it was going to be or what else was going to be in the river. The edge of the river turned out to be about waist height and the river got deeper going further into the centre. I was quite surprised at how warm the water was, as I was expecting it to be colder. With the help of Andrea on the bank we managed to drag the bikes that were still chained together back onto the river foot path.

The bikes have some minor damage: my Brooks saddle including the seat post, the rear light on the bike rack and the top of the bell are all gone. The light and saddle would have both needed tools to get off, as I’m sure the water wouldn’t have loosened the nuts and bolts. My girlfriend’s bike has lost the lights, and a tire has gone soft.

This tweet from Bromley Cyclists is rather useful advice, though rather a little too late:

Hopefully we’ll both have working bikes for our trip up to Scotland next week, particularly with Andrea not having a spare bike.