With the extra eating over Christmas, I’ve started out on my (evening) cycling again. On the 1st of January I headed out East and got to Rochester before getting on the train home. On the way near to Ebbsfleet International I found a rather interesting sign that I just had to take a picture of.

After uploading it to Flickr, I check that I had geocoded it right, by looking at the map on Yahoo. I got very confused. It seems that Flickr need to start using OpenStreetMap data for London. Yahoo don’t that the new Channel Tunnel Rail link and some of the new roads around Ebbsfleet International, though they do have the location of Ebbsfleet International. Compare Yahoo with OpenStreetMap.

UPDATE: Looking further it seems that Flickr are using older map tiles compared to Yahoo.com, but appear to be the same tiles as used in Yahoo UK. 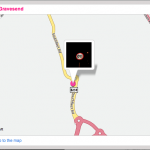 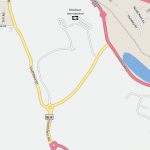 On the way I was testing out some routing using osm data, and found a few data bugs. One very important one being a primary road that goes through a tunnel, which doesn’t allow cyclist, pedestrians, nor horse drawn carriages, hence routing cyclists through it shouldn’t be done.

On the 2nd day of the year, I took the train down to Caterham, which is just inside the M25, and then cycled back up mostly using the NCN21. On passing through New Addington, I got a little mapping done on the way, mostly new roads that are completely missing from OSM, there is a lot of mapping required down there. Anyone up for a mapping party?